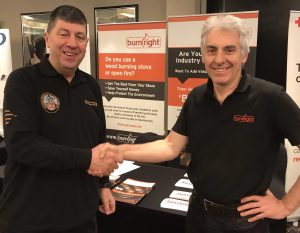 Thousands more Burnright leaflets are set to make their way into homes following a successful weekend at the NACS Show in Stratford-Upon-Avon.

Sweeps, installers, fuel merchants and stove manufacturers all engaged with the campaign, which had a stand at the show over the two day event, held at the Crowne Plaza hotel.

Martin P Glynn, NACS President & CEO, said: “Burnright is an excellent campaign, we are pleased on behalf of NACS members to be involved and fully endorse the campaign. All chimney sweeps have a responsibility to advise their customers on the safe and efficient use of solid fuel appliances.”

Martin added: “The Burnright campaign educates both consumers and chimney sweeps. It is essential in helping to provide information on how to protect the environment and protect the consumer. Burnright literature has now been introduced on the NACS training course. I would advise all members to to take an active part in the campaign.”

David Sudworth, a co-founder of Burnright, said: “We had a fantastic response at the NACS Show. It’s clear the Burnright campaign is really well regarded among solid fuel professionals and many want to learn more about how they could become involved. 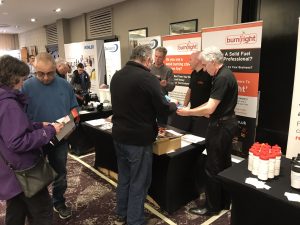 Lots of interest at the Burnright stand

“The campaign is just one year old, but in that time, it has achieved a lot. It has received the backing of DEFRA, which specifically highlighted the role of sweeps and the solid fuel industry in helping to tackle emissions from domestic appliances. That in itself is a big step forward because, by working together, we can have a positive effect.

“Thank you to everyone visited our stand, and also a big thank you to the NACS board members for their support of our campaign.”